Dropping the Ego in Yoga Practice, Perspective from a Yoga Instructor in Conshocken, PA 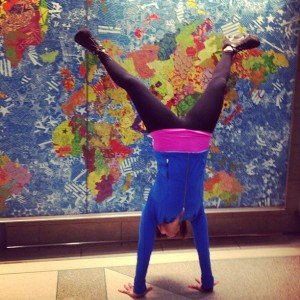 Back in May, I was walking with some friends outside about to enter a local neighborhood restaurant. One of them said, “You should handstand up against that tree! It would be an awesome picture!” I paused, clearly with hesitation knowing the time wasn’t right. The tree was super small. I was wearing my Hunter boots, which I absolutely adore and the ground was wet. I thought about taking my boots off but the ego was saying, “What a cool picture. Definitely keep the boots on!”

Again, hesitation was in my heart. I knew I shouldn’t but hey, I got sol, right? I did it anyway.

I kicked up. As soon as I took flight, my feet were WAY heavier, thanks to the cool boots I had on and I got nervous. My right arm buckled and I totally bit it, landing really hard on the concrete. As soon as I was on the ground, I knew something wasn’t right. I got up and couldn’t straighten my arm. Great! I had been working on banging out handstands the past couple of months. Kicking up wherever I could, at home, in public, you name it. (The picture shown in this post was taken at the Philadelphia Airport at about 6am. Totally normal, right?) I was feeling confident about it. Not in a bragging, boasting sense, but in a proud sense. I had the strength to hold myself up. I was proud.

The first person I called was my massage therapist. I said, “Hey! I just bit it in handstand and can’t straighten my arm. Can you squeeze me in tomorrow to work it out?” Her response, “Um, Ang, I think you need to go see a doctor. I don’t want to touch it until you do,” Not the answer I was expecting, but I took her advice.

Well, that little incident sent me right to the chiropractor for 2-3 days a week of treatments. For 5 weeks. And guess what? NO YOGA until I got clearance. WHAT THE HECK WAS I GOING TO DO?

When I thought about it more, it was exactly what I needed. In the grand scheme of things, after 15 years of practice, 5 weeks off wasn’t a big deal. I have never gone that long without practicing. Ever. But I realized I needed that extra time to reflect on what happened, because everything happens for a reason. And the lesson: DROP THE EGO. I knew better. I knew I shouldn’t have kicked up that day. I knew it. But that little voice, Ms. Ego, kept saying “You can do it. Cool picture! Sweet boots! Show your friends you can do it. Blah blah blah”

We are all guilty of it. We all suffer from the ego speaking up way too often. I see the frustration every day on Sol yogis faces when they fall out of crow, or can’t hold half moon longer than they “think” they should. Crescent lunge isn’t as deep as it was yesterday. In side plank, the hips are so low and the shoulder is suffering because they’ll be damned to drop one knee to the mat. Blocks aren’t used in triangle or knees don’t drop to the mat in low plank when clearly they should. I could go on and on. I see it. Every day.

But ya know what? It’s yoga, people. It is called yoga practice, not yoga perfect. We are not on our mats to bang out the perfect pose. We are there to release and reset with our closest yogi friends. To make our bodies feel good. To sweat out the toxins and smile. To shut off the mental chatter for 60 or 75 minutes. To disconnect from the outside world, work, drama, to-do lists etc. And our cell phones. Ahhhhhhhh…..

Next time you are on your mat, drop the ego. I promise your practice will benefit from it.